Losing and finding a home

When Jamila finished high school and decided she wanted to continue studying, she knew all too well she did not have the means to finance her education. ‘The rent for a small room, shared with three other girls, was already more than I could pay. Let alone the food.’

So, Jamila was very grateful when her aunt, who lives on the outskirts of Marrakech, invited her to come live with her family. Her aunt has a small apartment and three little kids of her own, so Jamila just hoped for the best and registered as a student in both economics at university and bookkeeping at a vocational institute.

After a year spent cooking and cleaning while living with her aunt, she knew this was not working. Jamila was unhappy with her results at university, as she did not have enough time to study. ‘I felt obliged to help my aunt whenever I could. It was expected of me’, says Jamila, ‘I had to earn my keep.’

Jamila applied for a place at Dar Moustaqbel. She knew the selection process was strict as she was denied a place the year before, because of a late application. The team at Dar Moustaqbel found her story convincing and decided she could come live in Dar Moustaqbel. Jamila was over the moon.

But before her first week at Dar Moustaqbel ended, her family called with bad news. “Our home has been washed away”, said her mother. Jamila sheds a tear, ‘the home in which I was born, everything we had, has gone.’

A couple of weeks later we visit her parents in Tinnitine, a small village near Imlil. Jamila’s parents are grateful to have found refuge in a small abandoned home provided by fellow villagers. Jamila takes off her snow white, high top sneakers and puts them neatly next to the door, replacing them with charcoal coloured plastic sandals.

Lalla Aicha, Jamila’s mother, remembers ‘that awful day’ in vivid detail. ‘It was at sunset when it started raining in torrents. Our home was under attack by a strong stream of water. After a while I got really nervous and we decided it was time to pick up our belongings and get out of there.’ Jamila’s father, Moulay Brahim, who has been crippled since he was a young man, nods quietly.

Lala Aicha: ‘First I took the sheep and brought them to a safe place. Then I took my husband on my back and brought him to family members nearby.’ She went back a last time to bring their calf to safety. ‘Some of the chicken didn’t make it. I am still sad I wasn’t able to save them, but I should be grateful because we survived it.’

Jamila smiles, happy to see her parents safe and in good health. Her mother Aicha: ‘There’s one thing that has made this disaster bearable. The fact that Jamila is safe at Dar Moustaqbel. We don’t have to worry about her. Jamila is in a good place.’

It has not always been easy to get hold of Jamila id Bella during the Coronavirus crisis. She is one of the students who has problems getting online, now that she is back with her parents. ‘It is difficult to be back in the village, I am not used to life here anymore. I just hope we can get back to Dar Moustaqbel soon.’ 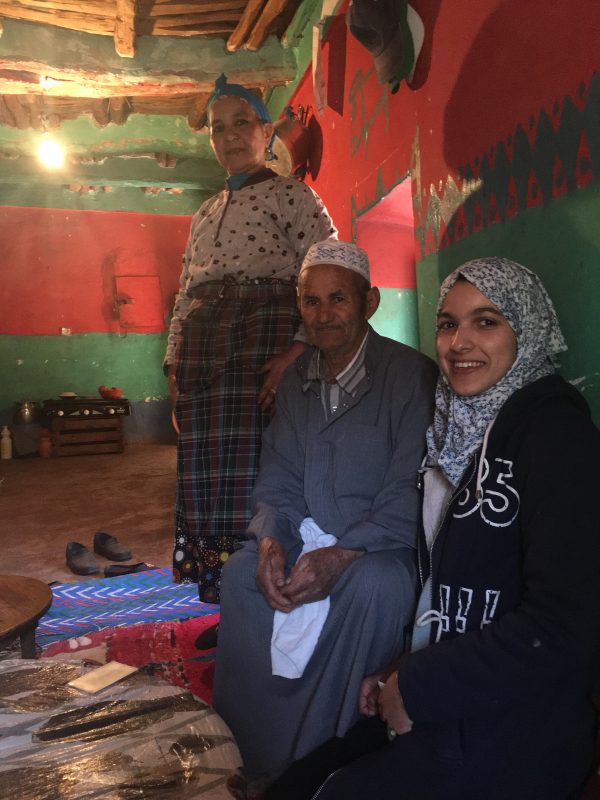 The mission of the foundation is to fight poverty.

The foundation aims to provide assistance to people in need of help for the purpose of their well-being and/or prosperity and all matters related or conducive to the above, with the objects to be given their most expansive possible interpretation.

The Foundation will achieve this by, but not limited to, providing direct aid (goods), granting microcredits, providing information and or/financial means.

The R.C. Maagdenhuis Foundation supports social projects aiming at activation of (vulnerable) youth and elderly. The foundation stems from the catholic orphanage for girls that was located on the Spui in Amsterdam until 1953.

The Maagdenhuis started exploring needs and possibilities in Morocco in 2016, and has since enlarged its operating range to Morocco.

The Maagdenhuis reserves its support for small-sized projects, initiated and carried by the local population. The main emphasis is on care for the elderly, children with disabilities, and education for girls from rural areas.

The AKBHHH, founded in 2006, strives to humbly contribute to the greater whole. Hence the name Alle Kleine Beetjes Helpen, meaning every little bit helps in Dutch.

AKBHHH is a small foundation based on enormous enthusiasm. It supports projects focused on nature &amp; climate, education, development and health care, both in the Netherlands and beyond.

Small scale, quick and flexible are the key factors for its success. AKBHHH is highly effective in its decision making and has ample experience identifying small and personal initiatives that matter greatly.

The Hadja Zoubida Foundation (HZF) is a non-profit organization established in honor and loving memory of Hadja Zoubida.

The founders of HZF are her descendants. Folllowing in Hadja Zoubida’s footsteps, the foundation’s objectives are to: