From failure to victory

‘Times can change’, says Zineb Bidari (19). During her first year in university studying physics, Bidari became demoralized by her ‘unspeakable’ exam results. In contrast her second year has been marked by victory.

It seems as if everything has changed. Two years ago, she wasn’t sure whether she could be able to pursue higher education. ‘Without Dar Moustaqbel’, says Zineb Bidari, ‘I would have been worrying about money all year’. She would have certainly tried going to university, because she is extremely motivated, but life would have been more complicated for sure.

In September 2016, when Zineb Bidari started her life as a student and became one of the first ten girls to enjoy the benefits of Dar Moustaqbel, she didn’t master the French language in the slightest. While the subject matter of her choice, physics, is taught entirely in French. 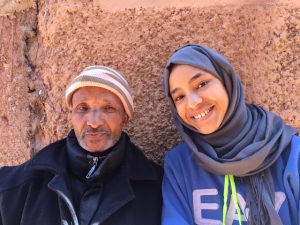 ‘During the first few months I was lost. I didn’t have a clue what the professor was talking about.’ Zineb Bidari received her results of the first semester during our yearly Parents Day. And they were bad. Very bad. But she didn’t want to disappoint her father, so she buried the tears deep within her, searched for her best smile, and received her father with love and grace – taking his wet coat and engaging in conversation about her home village Ouirgane.

Ouirgane is where Zineb was born and where her parents still live with the rest of the family. Zineb’s father is proud of his daughter’s achievements. And he is happy that Dar Moustaqbel is able to help him. ‘I wouldn’t know what to do otherwise. How can I help my daughter study in Marrakech, while I can’t even manage to pay for our food? I borrow from the left to fill a hole on the right. There is never any money left, I always owe someone something. It is not a stable situation for a student that has to concentrate on their studies. I wish I could do more for her, but I can’t.’

A couple of hours later, when all parents had left, Zineb was in tears. A year and what later she still remembers it vividly. ‘I was really shocked by my first exam results. I was desperate, just wanted to give up. I was lucky to be living in Dar Moustaqbel, but it seemed as if I didn’t deserve it, my grades were really bad. But thanks to the support around me I was able to keep trying. Before the year was over I realized that I could do better next year. But at the time it was just hope. Hope that my dreams could still become true.’

This response is typical of the cool and calm Zineb possesses. She is realistic about her goals and knows what she wants. And she wants it bad. So, she works hard. Very hard.
And it paid off. Zineb validated all subjects during the first semester, and did well throughout her second year in university. Still, she is not over the moon. Zineb Bidari smiles and says ‘there is still a lot of work to do to get where I want to be’.

True, but she is well on her way. After spending her first year’s internship at the Moroccan mining conglomerate Managem, she spent last July at mining laboratory Adminier. ‘If my job later on resembles what I am doing now during my internships, I am going to be so happy.’